If you are looking for more information about the protest against banks and Wall Street, then you did not follow all of the links in the previous posts…However I am sure there will be something pertinent in the following…

Well, recently in the news was a report of a ‘Terrorist Plot’, or whatever your chosen Zionist-owned news media labeled it, of an Iranian plot to assasinate the diplomat from  Saudi-Arabia.  Jeepers, how timely.  With all of the Hullabaloo regarding the protest against Wall Street, we need a ‘reality check’ to prove that the establishment is still ‘working.’  Increase the budget for Homeland Security.  Holy Christmas, on my next visit to the USA, the ‘Philadelphia Beagle’ is sure to find the package of Krakauer Wurst I am trying to ‘smuggle’ in…Or pull the Castrol Super-Clean from my baggage as I try to come back home…Of course they leave the gas cartridges for my Paslode nail gun.  Crikey what nonsense…

Not to mention that even if you a Veteran, with a card showing that you are carrying shrapnel from Guatemala, Kabul, and various other places you were sent ‘in defense of your country’  You are subjected to a strip search by some Jamaican /Haitian /Indian who can barely speak English, and seems to relish the position of power he /she / it has, and makes you ‘bend over and spread your cheeks’ because it is probably normal in the country they have somehow managed to ‘immigrate’ from.  Of course in ‘their’ country’ it is normal to cut the heads off of chickens, and let the blood trail predict if the child is going to be a boy or girl, the crops will grow, or if grandma is going to die.  Geez Louise!  The ‘safety’ of our borders is being protected by the very people we should be keeping out!

My Parents cancelled their trip to Israel because I told them that the “Kacke ist am Damphen dort” ( the shit is cooking there)  [sorry a translation, not against the rules]  More on this later…

Well call me a conspiracist, but when the heat is on, maybe it is co-incidental, but it seems there is always a sudden diversion.  George Bush was a President who was really NEVER elected (both times) by the American People; first through a fraud of the courts, and next through the fraud of technology…Read this about the Diebold voting machines.

For those of you who like videos, here is one now:

Well he is not my ‘Commander in Chief’ any longer, or anyone’s for that matter.  I could not give a rat’s anus if he is somewhere in his own private ‘neverland ranch’ raping pigs, sheep, cattle or chicken.  However, the point remains that this boob made it into office – twice.  However at the beginning of his term, the idiot could not even complete a sentence.  The lackluster start was definitely not making any profits for his cronies…Jeepers Creepers, ‘we cannot sell any more weapons, since the military is already overstocked…And the ones in inventory are almost past their expiration date…America was in a disarray.  Most people believed it was a sham.  We just were recovering from the Monica thing, and now we had this rehab President.  We were disillusioned.  Without direction.  What could be done?

Conveniently, in  a ‘think tank’ called “Project for the New American Century”, in a Report written by Thomas Donnelly,  came up with the following advice in their report, “Rebuilding America’s Defenses”

In Section 5, is the following:

“Further, the process of transformation, even if it brings revolutionary change, is likely to be a long one, absent some catastrophic and catalyzing event––like a new Pearl Harbor”

Hmmnn…What was a limp, Viagra-intolerant ex-narcotic user to do?  And really, the VP, ‘Mr. Haliburton’, was not making any cash either…How about 9/11?  If you have any idea, or a few brain cells that are able to rub together, you cannot believe that what was reported is anywhere near the truth.

And what about the 9/11 report?…I forget what it cost, but it found no link to Iraq and the ‘attacks.’  Oh yes, there were the ‘Weapons of Mass Destruction.’  Were any found?  Even the doctors were still looking for ‘weapons of mass destruction’ after his capture. 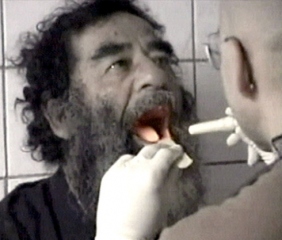 How about reports using scientific evidence?  Like Physics…Newtons’s theories do not lie.  The apple falls, it hits you on the head.  You can Google 9/11 truth, or you can click on the link.  (that would be the blue text 9/11 truth.)  Engineers that have studied the incident, and cannot abide by the ‘official’ story.

So we had 9/11.   Google it if you must.  But where are the largest oil reserves?  Between Iraq and Iran.  Who sold the ‘Bunker bombs’ to Israel?  Click on the link…or that would be our pal Barrack, who delivered on the promises from, you know who, the wasted weasel that preceded him.

Are we protesting yet?  Yep, but still with no articulated demands, or plans for change or any solutions.  Oh yeah, change…Wasn’t that the campaign slogan from Mr. Obama?  Sure we got change.  From bad to worse.

Now I have to admit, even I was impressed by Mr. Obama.  Over here (that would be in Germany) he appeared to be a ray of hope to ‘bring back America.’  In my classes, I explained, it was not one man that could change the course of the country, but the Congress and Senate were the ones who really made the rules.  We also discussed what ‘lobbies’ are, and how this influenced the whole process.  (DEFINETLY more on this topic at a later date.

So there are a bunch of people protesting.  (I told you there would be something here).  Here is a picture: 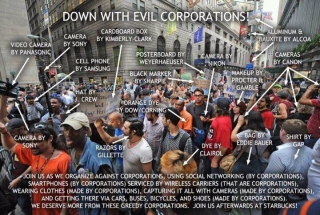 Now many may take this as a joke.  However, let’s look at the corporations.  How many are US corporations?  Sharpie?  Made In China.  Eddie Bauer Bag, made in China, Gillette Razor…made in…China, Sony, Nikon GAP…made in  China! J.Crew, made in China.   Is anyone seeing a pattern here?

Well, for those of you late to class, or not paying attention, the major complaint is no jobs.  How can that be?  (That’s a rhetorical question son).

So, the topic now is ‘off-shoring.’  (Yes, the blue text means it is a link for more info).  It has occurred because somehow, it is profitable to do so.  Now Mr. Obama proposes a ‘tax’ on the ‘rich’ to pay for his ‘jobs bill.’  Hold the phone.  This is the same Administration that wants to make a ‘Tax Holiday‘ for corporations???  Of course, this would be for the rest of the corporations already NOT PAYING THEIR TAXES.  I do not need to write all of this again, since it is very clearly written here: How the U.S. Subsidizes Offshoring of Jobs  Yep, that would be one of those links for more information.

So to wrap this up…I cannot believe that a bunch of well-armed Americans are not either Marching on Washington, or going into the brokers in Wall Street,  loaded up with a bunch of rope, probably bought at Walmart, and made in China, and stringing up all of the politicians (except Ron Paul) and bankers, from every light post in the town available.

There needs to be change.  But before there is change, I think there will be another Bastille day.  I wonder what they will call this one.

Before I close, there needs to be a clarification about Capitalism.  What America, and the world has, is no ‘Free-Market.’  Once again a link to the Ludwig Von Mises site.

The Summary of solutions: 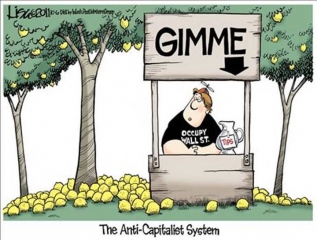 For anyone slow…that would be a ‘lemonade stand’, where one sells L-E-M-O-N-A-D-E.  Look at the lemons laying on the ground.  See the fat oaf complaining?  OK  is it clear???